TALE OF DISCOVERY OF CINDERELLA

In India, the most undeserving people behave like kings and queens in front of the people below them. They knowingly/unknowingly humiliate their sub-ordinates, helpers, community helpers, drivers, maids and servants. Forget treating them equals, people don’t even treat them like humans. They often forget if it was not for these people, the equilibrium of our houses would go for a toss.

We have been taught to respectful and compassionate to all, irrespective of their jobs. And I tried to inculcate the same values in my kids since they were born.

Talking with respect to the plumbers, electricians, carpenters who come in the house for work. Being compassionate to the maids and servants working for us and doing all our house work was the first lesson I had taught my kids. When the staff at home is sick, I personally take them to the doctor and make sure they are not exerting themselves till they get better is what my kids have seen. And as rightly said, my daughter followed me and she displayed the same respect and compassion to the people working for us.
But things started changing when she started with her pre-school. I noticed that she is becoming more selfish, arrogant and disrespectful towards the staff. We have a  full time old staff at home which is like family and she started mistreating her. After a bit of research, I figured out that she is getting influenced by her surroundings. I saw kids around her are throwing tantrums, hitting their house maids, spitting at the drivers, screaming at the security guards, bullying the kids of the staff. I was so sorry for them and wished their parents realized what they are doing is what their kids are learning. I was very sad to hear from a 6 year old boasting to her mother that "I will handle this Maya(her house maid who is of her mothers age) Mumma, you don’t bother!". Do you really think, with this behaviour your kid would ever learn the RIGHT thing?

Now, before educating the world, I had a bigger task in my hand. I had a 3 year daughter who has already learnt a little bit of WRONG from her surroundings and now I had to "DO IT RIGHT". But I didn’t want to preach her, I wanted to educate her. I wanted her to figure out,  her own definition of GOOD and BAD. So I had a master plan to execute.

I told my house maid to stop doing all her work. I started this experiment on Saturday on a weekend, when I was off from work. She got up in the morning and shouted "Didi,, Du du", I told her "Beta, Didi is not well, you have to make your own milk!".She didn’t understand what I meant, then I told "Ok, I will make milk for you and bring, but you need to ask me politely". She pleaded " Mummy, please give me some milk!". I gave her milk. Then she shouted again, "Didi, I want that chocolate!". I again told her, "I would give it to you if you ask and not order!". Likewise, till Sunday evening, I corrected her. She understood that things will not move unless she requested me for it.

Then in the night during her bedtime stories, I told her the epitomic CINDERELLA story in which I purposely stressed on how the step mom and step sisters asked Cinderella to do all the work and spoke so disrespectfully to her. How life gets fortunate to some and unfortunate to some. At the end of the story I told her to summarize the story. And as expected, she co-related my house maid to Cinderella. She became compassionate towards Cinderella and in turn towards my house maid too. That was an enlightening moment for her; and a proud moment for me. She had absorbed just the correct thing I wanted to convey to her. 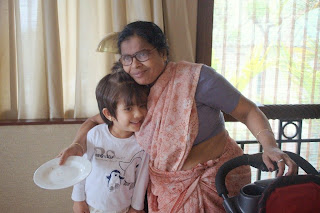 That was the last day when she misbehaved with my house maids, or driver or helpers. She has gone a step ahead of respect and compassion and started loving them. We go to restaurants and she asks my house maid what she wants to eat? If we don’t take my maid with us, she makes sure we are taking a parcel for her when we go back. She would not let me sleep in the afternoon on weekends, but makes sure my staff gets that one hour of rest in the afternoon every day. When my staff is not well, she is the one who goes close to her and gives the "JADDU ki JHAPPI" to heal her. She wanted to celebrate my maid’s birthday, but she didn’t know her birth date. So we have decided on a date when we celebrate my maid’s birthday. She takes care of all her smallest of wishes. Her television serials, her likings in sweets, her new clothe everything is her responsibility now. I can just see the 360 deg change in my doll after just a small lesson which I taught her.

I am not sure what she is going to be when she grows up. But I am sure, she is going to grow up to be a very nice human being. She feels the pain of people around her; she is compassionate towards the less fortunate. She can see their happiness and understand their sorrows. I just wanted to teach her to be HUMAN; she has proved me wrong and taught me how you can be a LOVELY HUMAN!!

I am sharing my Do RIght Stories at BlogAdda.com in association with Tata Capital.

Won the first prize and got an IPAD Mini 16 Gb. Thank you all for liking it.
http://blog.blogadda.com/2013/10/23/winners-do-right-stories-contest
Posted by ThousandOceansInside at 3:02 AM